Longboarding, much like skateboarding, began as a way to keep surfers entertained when the surf is low or the sea too rough, but it has become ever more popular and it’s a sport in its own right these days. 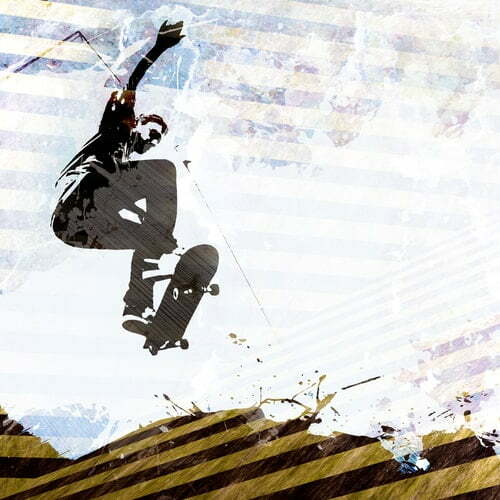 Thrill-seekers take up this extreme sport like it was a game of Jenga, bombing hills and carving streets where they have to compete for not only with each other but also bigger players, like cars. Sure enough, an official event will book a section of a road fir the duration, but where are longboarders to practice their slides and tricks if not on the road?

How to Prevent Them

Before mentioning any potential risks and injuries, we should talk about safety. If you have the least amount of sense, the minute you buy your first board, you’ll buy the protective gear, as well. Don’t leave the store without a helmet, knee pads, elbow pads, gloves, and sliding pucks.

You can also take some shin guards, though most boardriders eschew them. Another piece of protective gear that many people forget is your cell phone. Yes, it can do more than filming your exploits. In case that someone gets injured beyond the ability of anyone present to treat, calling the ambulance ASAP is the best thing to do. These types of injuries are rare, but they do happen.

It’s a good idea to wear thick pants, such as jeans, and a matching jacket, weather permitting, to avoid scrapes and road rash. If it gets too hot, however, lose the pants and the jacket, and make sure to strap the knee pads and elbow pads. Alternatively, go for a pair of cargo pants with ripstop fabric (reinforced stitching), as they’re roomy, have lots of space, they’re generally well-aerated, and you can buy them at reasonable prices. Some boarders bring a pair of jeans with them when they ride steep hills, put them on at the top of the hill and take them off afterward.

Now, let’s move on to the meat of the matter – the most common injuries in longboarding. It’s widely agreed among boardriders that the most common injury would be road rashes and scrapes. This is simply an inevitability that no amount of protection will completely prevent, so you’ll have to learn to live with it. Still, you can minimize the damage by wearing the right protective gear – helmets for your head, pads for the exposed joints, thick clothing for the rest of the body, as well as gloves and pucks for your hands and palms. 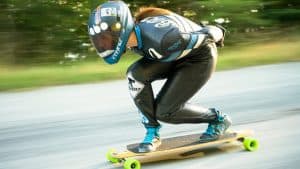 Yes, the gloves tend to get toasty, even more so than a pair of thick pants, but you’d be doing yourself a great disservice if you didn’t wear them at all times. If you do take some scrapes and road rash, it’s a good idea to have an antiseptic and some gauze close at hand, so you can treat it immediately. It stings like hell but saves you a lot of headache later on.

Another fairly common type of injury in longboarding is a sprained a wrist. There’s not much you can do to prevent this, apart from warming up prior to bombing a hill. Contrary to what the uninitiated might think, slides like the Coleman or Superman are not inherently risky in this regard, at least no more than carving or running against another boarder.

It happens when you automatically stick your hand out in to break your fall, and can happen even to pedestrians falling off the pavement (yes, it happens). The best thing to do is consult an expert (i. e. a doctor), but short of that, you need to rest the wrist, cool it with ice, or compress it with a bandage or a compression sleeve.

Your knees and ankles can suffer, as well (notice any common themes, yet?). This goes double if you don’t warm up properly, and can happen very easily if you have a bad form and/or land on your feet a lot. There’s not much to do to treat this, aside from resting, icing the sore areas, and generally taking a break from longboarding for a spell.

The next most common injury ties into the previous one – a dislocated shoulder. Aside from road rash, scrapes, bumps, bruises and, perhaps, sprained wrists, dislocated shoulder is an all-time favorite! The thing is, you’ll need to develop some serious speed to be able to dislocate a shoulder, so if you’re just carving some gently sloped streets or navigating flats, you’re not in any real danger of suffering this. 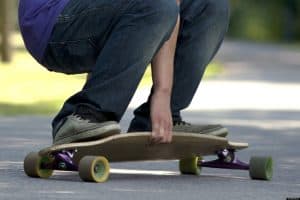 On the other hand, hill-bombers and free-riders can go in excess of 50mph. You do the math. If this does happen to you, don’t go Martin Riggs on it and try to pop it in yourself. Always consult a medical expert first. Short of that, immobilize your hand, ice the shoulder, and generally try to favor that hand until you can have someone experienced take a look.

Speaking of dislocated joints, you might suffer from an injury similar to the previous – it’s what boardriders call a hipper. Essentially, this happens when you slam directly on your hip while longboarding. The symptoms include swelling and pain, and the hip becomes inflated with liquid, leading to your side feeling like a balloon.

It’s very painful and debilitating, and the condition may last for a few days, while the road to recovery takes even longer. Hippers are notorious among the boarders for their tendency to stay dormant for a long while until even the slightest unexpected tap awakens the monster. The best way to treat this, apart from calling the doctor, is lots of rest, lots of ice, and generally keeping in touch with the longboarding community online rather than IRL.

On a side note, although we call it a common injury, we’re actually scraping the proverbial barrel at this point. It does happen, but the circumstances that lead to it are easily prevented by taking safety precautions. Still, no one’s found the cure for bad luck, and until that happens, hippers will happen, too.